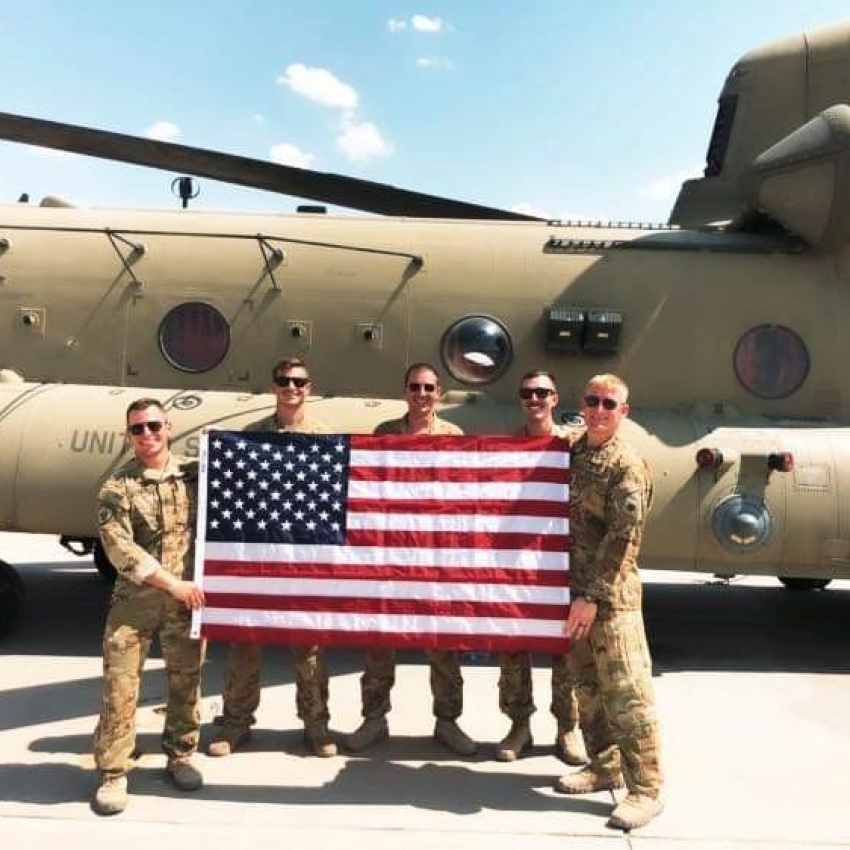 The very first time Chris interviewed at McGough, he knew it was different.

“I remember interviewing with Dave McLaughlin initially and we began talking about my time in the service. I was explaining some of the challenges with being enlisted and handling training while working full time and he just stopped me and said, “That’s ok, we’ll work around it.” That’s when I knew – working at McGough was just different.”

For Chris, that level of support and understanding was instrumental in not only his life, but his family’s as well. Enlisting in 2006, later becoming a Chinook helicopter pilot in 2017, he’s more than familiar with the challenges service members face with starting and stopping careers while being enlisted.

“At the time, interviewing in 2017, I already served overseas and knew how difficult it was for service members and veterans not only continuing their careers in the states, but gaining valuable experience to grow at the same time,” said Tinklenberg.

So, when McGough offered Chris a job working as a PM on the U of M Fairview project, he jumped in headfirst, ready to learn and grow with the company. But it wasn’t before long Chris got a call from the service – they needed him to start a full-time, two-year deployment. The first year would be spent training in the U.S., the other in Iraq. That’s when McGough stepped up, yet again.

“When you get that call, there’s so many things going through your mind, but McGough was consistent from beginning to end. Leaving your wife and three small children home alone is disconcerting in its own right – the last thing you’re thinking about is work. But they just kept showing up.”

McGough, a proud supporter of Beyond the Yellow Ribbon, dedicates valuable time and resources to supporting veterans home and away, stayed true to their commitment. Chris began receiving phone calls from McGough offering to help his family in his absence with household chores like shoveling and mowing the lawn to grocery shopping for his wife; leaving him grateful and appreciative of the company, changing his perspective not only about McGough, but the team that works there, too.

“The peace of mind McGough provided me and my family in that time of need is something I don’t think that I’ll ever forget. How could you? Those aren’t things provided to everyday normal people, so I couldn’t be more grateful.”

“When you set foot inside this building, you’re more than just an employee. And a lot of companies say that – but not many companies live and breath that. They live it here.” Chris recalls receiving care packages for himself as well as his fellow service members overseas, regularly communicating with the HR staff stateside, sharing updates and checking in to see if they could send him anything to provide some comfort of home.

And after spending a little over a year in Iraq, Chris was humbled yet again. McGough wanted to bring him back in to work as a PM when he returned. The relief he felt upon returning was indescribable.

“After coming back and knowing McGough was welcoming me back – the pride I feel is such a huge sticking point for me. They committed to me, and it means everything.”

Today, Chris is working in the St. Cloud office, getting reacclimated to life at McGough, loving his job and excited to continue to grow his career in construction for what he believes is an organization like any other.

“I definitely see myself being at McGough for a long time moving forward. There’s not a lot of companies like this out there and I want other people to know that. This place is special.”

Our legacy is built by our remarkable people.

Our people drive our company’s success. From the Irish McGoughs of the 1800s to the McGoughs of today and countless loyal, experienced, dedicated and expert team members over the years, our remarkable people have built a tradition of outstanding craftsmanship, exceptional outcomes and constantly evolving standards. Learn more about McGough’s legacy of excellence and how it drives our innovation today.