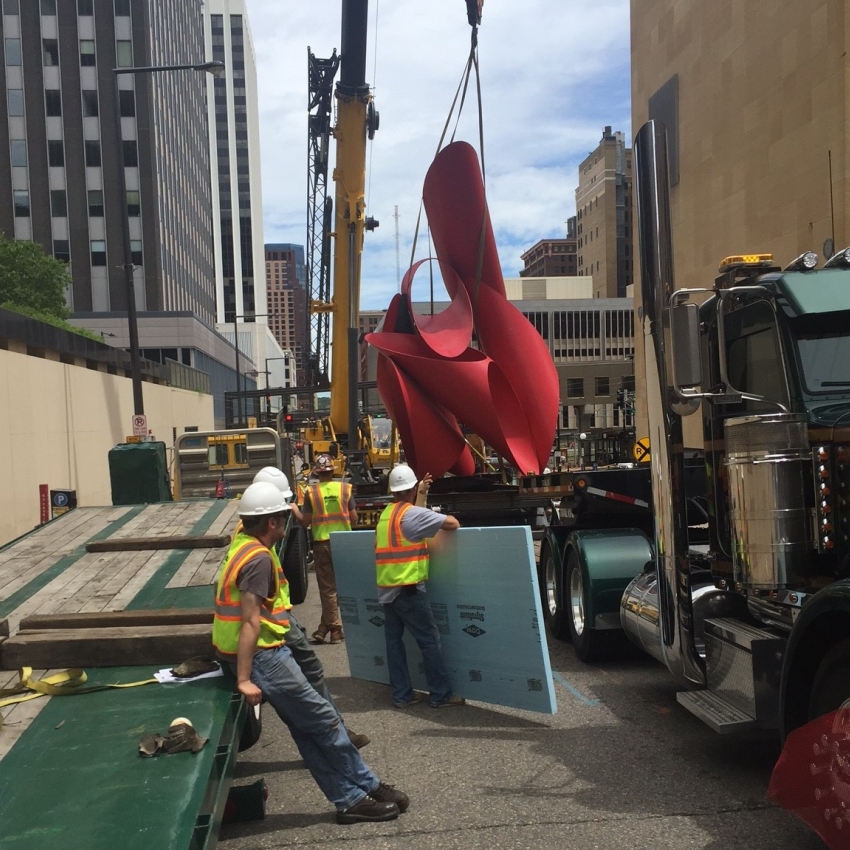 Ecolab Inc. has reached an agreement with Public Art Saint Paul, a nonprofit that engages artists in shaping the form and experience of public spaces in the city, to donate Above, Above, the iconic Alexander Liberman sculpture that has been the centerpiece of the outdoor Osborn Plaza at the former Ecolab Corporate Center in downtown Saint Paul for nearly 45 years. Public Art Saint Paul and McGough Construction will move the sculpture to Western Sculpture Park at 387 Marion Street in Saint Paul.

Above, Above and the Osborn Plaza, the rooftop of the three-story building adjoining the 22-story Ecolab Corporate Center, were dedicated on Oct. 2, 1972. Ecolab is in the process of relocating to its new global headquarters in downtown Saint Paul, and in April, reached an agreement to sell the Ecolab Corporate Center at 370 Wabasha Street to a development team led by PAK Properties.

Were thrilled to accept this generous gift from Ecolab of a major work by Alexander Liberman, said Colleen Sheehy, president and executive director of Public Art Saint Paul. Liberman is an important 20th-century artist whose works are in many modern art museum collections and sculpture parks.

Artist Alexander Liberman was born in 1912 in Kiev, Russia, and was considered a revolutionary minimalist artist. He produced works predating the movement by more than a decade. His fascination with American industrialization and modernization resulted in his widely known red steel sculptures and geometric paintings. His sculpture and paintings are included in numerous museum collections, including the Art Institute, Chicago; the Los Angeles County Museum of Art; the Metropolitan Museum of Art, New York; the Solomon R. Guggenheim Museum, New York; the Museum of Modern Art, New York; the Whitney Museum of American Art, New York; and the Tate Gallery, London. In addition, his public sculpture can be seen in more than 40 cities around the world. Liberman died in November of 1999 at the age of 87.

We are fortunate to have strong relationships with both Ecolab and the City of Saint Paul, said John Pfeifer, McGough executive vice president of construction services. We saw a unique opportunity to honor both of these relationships by teaming up with Ecolab to preserve Saint Paul’s art resources and enhance its park system.

Above, Above will join 16 other sculptures by local, national and international artists at Western Sculpture Park, a city park where Public Art Saint Paul has maintained a sculpture exhibition and offered youth programs in collaboration with the Saint Paul Parks and Recreation Department for nearly 20 years.

A dedication ceremony for Above, Above is planned for Noon on Tuesday, July 25 at Western Sculpture Park.

McGough stands ready to help you build any project, anywhere. Our locations are staffed with remarkable people who are ready to partner with you on your next project, whatever its size, scope, scale or style. With decades of combined experience and a focus on your needs and priorities, we have the capabilities, expertise, interest and enthusiasm to achieve your vision for any facility in any location.